Isn’t it amazing how even the smallest things can so unexpectedly trigger a tsunami of guilt in us parents?

The way another mom at the playground rolls her eyes when you pull out a bottle to feed your baby. The shocked look a dad at Target gives you when you hand your toddler candy to get him to sit in the cart. The look in your 6-year-old’s eyes when your temper snaps after her tenth time out of bed after 10 pm.

If you’re like most parents, guilt is your constant companion, right?

But, parenting wasn’t always this hard. Nor did it go hand-in-hand with the feeling of guilt.

As a matter of fact, when I was a kid (and probably when you were, too!), gangs of unsupervised “latchkey” kids biked around the neighborhood in idyllic freedom while their parents were at work. And, when my parents were kids, moms held a cigarette in one hand and a baby in the other while the big kids watched TV all day long, and no one batted an eye. Go back a few more generations, and you’ll find eight year olds running the house and taking care of their siblings while their parents are out farming.

Compared to our ancestors, our kids have it made.

And, this generation of parents might be the best parents in history. We start educating babies before they’re born. We track every developmental milestone throughout their lives. We hover over every failure and rejoice over every success.

How did we get from there to here? If we’re such great parents, why do we feel so guilty? And is there anything we can —or should —do to stop feeling so guilty?

A Little History of Modern Parenting Can Help Us Understand Guilt At the dawn of the twentieth century, most people thought of children as an asset, not a responsibility. Sure, for the first couple of years they were pretty helpless and cried a lot. But by the time they could walk and talk, they were expected to be contributing members of their families and of society. They were caring for younger siblings, working in the fields on the family farm, and making money in factories.

Of course they didn’t experience the idyllic childhoods we hope to create for our kids today, but their parents also didn’t feel guilty about their children working hard or having hard days. Children were expected to be useful, strong, and resilient —just like everyone else.

In the twentieth century, that started to change. Child labor laws protected children from working, which gradually led to parents having fewer expectations about how children should contribute to the family. Obviously this change was good and necessary, but there were ripple effects. We stopped thinking of kids as assets and started thinking of them instead as long-term investments: projects that we had to put a lot of work into before we got anything back.

Or, as Peter Stearns puts it in Anxious Parents: A History of Modern Childrearing in America

In other words? If your kids have problems, it’s your fault.

But the Truth Is, Parenting Is Not As Big a Deal As We Think

It’s true that we as parents influence our kids in ways that no one else can. But although kids are vulnerable to our influence, it’s also true that they’re resilient —incredibly so. And while they do need for us to be the best parents we can  be, they don’t need for us to protect them from the world —or even from our own honest mistakes.

Because, no matter how much influence we have over our kids, in the end, they aren’t part of us. They’re separate individuals who are responsible for their own mistakes and decisions —individuals with the ability to overcome adversity. Ultimately, your child’s success or failure in life isn’t on you. It’s on them.

And so the first step in letting go of guilt is to recognize your limitations.

There are thousands of factors that come together to shape the person your child will become. Some of those factors have to do with your parenting, but many of them are completely out of your control. And at some point —sometimes a lot sooner than you expect —your influence will diminish to almost nothing, and you’ll be left hoping you did a good job, or at least that you still have a good enough relationship with your kids that they’ll talk to you sometimes about the problems resulting from your mistakes.

And that is totally okay.

Because you aren’t meant to be central to your child’s life forever.

They’re meant to leave you, and at some point in the not-so-distant future, you’ll be more relevant to their history than you are to their present. The mistake that’s making you feel so guilty today will look very small from your child’s future perspective. If you’ve done your job right, your child will be able to look back with a smile and say, “Oh, that? It doesn’t matter. It’s in the past.”

If you’re feeling guilt because of everyday, normal mistakes, it’s time to let go. Your kids are not holding onto every little thing you do wrong, and you shouldn’t either. Ask forgiveness if you need to, and then just keep telling yourself: it was a mistake, and it’s in the past.

Parenting Experts Are Great, But They Don’t Know Everything

If you have a hard time putting parenting challenges in perspective, you’re not alone. And it’s not surprising, because we live in a world of parenting information overload. Millions of mom blogs enable you to compare yourself to other parents and imagine that they’re doing better than you are. Thousands of parenting books quote experts telling you everything you’re doing wrong.

Heck, you can’t even log into Facebook without getting bombarded with contradictory parenting advice: Have a natural birth, have an epidural; cosleep, sleep train; vaccinate, don’t vaccinate; homeschool, support public schools; protect kids more, give kids more independence; make them play outside, make them practice math; be more strict with discipline, practice gentle discipline… the list is endless.

Combine the belief that you are (almost) solely responsible for success of your child with today’s unprecedented access to expert parenting information, and you end up with the nagging feeling that you have to know everything and do everything perfectly. How could you think otherwise? With so much to learn and so much at stake, it just make sense to learn all you can and do all you can to be better.

But the truth is, experts can only take you so far. And being a truly fine parent —even a great parent —isn’t something you can learn secondhand.

As a Parent, You Need to Learn to Trust Yourself

When I was pregnant, I was terrified of how little I knew. Like many of you, I decided to educate myself by reading —a lot. I read incessantly about pregnancy, birth, and babies. With no personal experience to help me judge what I read, I took it all at face value and believed every expert I came across.

Until I came across a book that changed my thinking about parenting forever.

It was recommended to me by a friend who I respected. I started it eagerly, ready to learn everything I needed to know about parenting a baby. But just a few pages in, I started to feel uncomfortable. I couldn’t put my finger on what bothered me, but the attitude of the book felt wrong to me. The writer talked about babies like they needed to be controlled in ways that I wasn’t comfortable with. I wasn’t even a parent yet, but my instinct told me that this book didn’t match my parenting philosophy.

By the time I finished the first chapter, I was upset enough to Google the book. I discovered that it was the only parenting book that had ever been condemned by the American Academy of Pediatrics. The feeding methods it recommended was associated with too-low weight gain for newborns and failure to thrive.

And in that moment, I realized that even though I didn’t know much about parenting, my instincts were good. I knew more than I thought I did.

And that’s true of you, too. You know more than you think.

Trust yourself, and you’ll learn to recognize when guilt is coming from inside you and telling you an important message, and when it’s coming from some outsider whose opinion doesn’t matter at all.

Guilt Can Be a Good Thing. If You Leverage It.

Which brings me to the third way to overcome guilt: use it.

There’s a reason you feel guilty. Sometimes you feel guilty because you’re trying to be perfect, and your goals are too high. Other times, it’s because you’re listening to an expert even though you disagree with them, so you’re torn between what you truly believe and what you’re being told to do. But sometimes, guilt is the voice of your inner heart, and it’s speaking to you for a reason.

If you pay attention, it’s not hard to tell the difference. This third kind of guilt is the one that matters —it’s what motivates growth. It’s the guilt you feel when you realize that your parenting choices don’t match your beliefs. That kind of guilt is a good thing. So let it change you. Let it be your motivation to sit down with your kids, look them in the eyes, and tell them you’re sorry. Admit to them that you made a mistake, and ask them to help you come up with a better solution for next time. Let guilt be your inspiration for positive action that can help repair your relationship with your kids.

When you do that, you’re not just overcoming guilt; you’re teaching your kids how to handle mistakes. It’s one of the most powerful and important lessons they can learn, and you’re teaching it by example.

What’s more, as you start to act on the good kind of guilt, you’ll find that the wrong kind of guilt starts to lose its grip on you. That judgmental stranger in the checkout line? She might not bother you anymore. In fact, you might find yourself giving her a big smile and a witty comeback in response to her evil glare.

Because you’ll know that your parenting choices align with your values. And when it comes to your family, your values are the only ones that truly matter.

Ready to stop feeling guilty? Think about this:

Over the next week, when guilt hits you, pay attention. Identify which type of guilt you’re feeling, and respond accordingly.

And don’t forget to come back here again next Monday — we’ll look at how we can give more freedom to our kids in this dangerous world that we live in — without feeling guilty in the process 🙂 (Sign up here if you haven’t already done so, to receive the article directly in your mailbox). 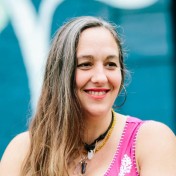 Lisa C. Baker is a part-time freelance writer and full-time mom of two in Atlanta, Georgia. She enjoys walking to the playground while drinking copious amounts of coffee. She blogs about why parents shouldn't feel guilty at How to Be Supermom.