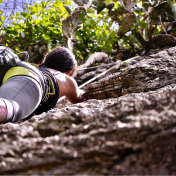 Dr. Barbara has a degree in medicine and has always been passionate about neuroscience and psychology. She is an introverted adventurist and loves to spend free time in the mountains. Dr. Barbara’s biggest joy and source of gratitude is her family and motherhood is her greatest adventure. When I was in high school, I was assigned an essay for a philosophy class. As a straight A student, I was devastated when I got a D on the essay.

My world seemed to collapse, as I realized with embarrassment that I was secretly struggling while my classmates seemed to be doing fine. The fear of failure and embarrassment became so serious that I even considered changing high schools for a less demanding program.

I vividly remember one particular day in which my emotions towards failure got the best of me and a schoolmate found me crying in the hallway. After listening, the classmate asked a simple question: “Is this the first time you feel challenged by an academic task?”

His words hit me hard. I took a deep breath and did a mental scan of previous tasks and homework. I quickly realized that until the philosophy class, I had not struggled academically. Learning was something that came effortlessly, with little hard work needed for positive results. Similar to a natural athlete being able to quickly pick up a new sport, school had always been easy for me.

As I shared this with my classmate, his face lit up and he simply assured me that I would be fine. It was only years later, as a mother, that I was able to look back and realize that his sudden spur of optimism was simply a positive recognition of the important part that failure plays in our lives.

He knew and trusted that once I put myself out there, I would learn how to move forward. He knew that failure was an essential part of success.

So for those who perhaps thought the title of this article was a mistake… it is not! END_OF_DOCUMENT_TOKEN_TO_BE_REPLACED