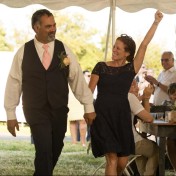 Kim is a wife, mom and Morai (Irish for grandmom) living in Wilmington, DE. While her favorite place is the beach, spending time with her Hub, playing with her grand-daughter, co-leading an 8th grade girls group, and helping her youngest get ready to leave the nest keep her off of the sand much of the year. Kim's passion in writing and speaking is to inspire others to not just "hang in there" or "make it through" but to thrive. "The greater danger for most of us lies not in setting our aim too high and falling short; but in setting our aim too low, and achieving our mark." Michelangelo At a recent youth retreat my 12-year-old nephew, Joey, was called up on stage along with four other preteens. Each participant had a box of tissues set in front of them. They were told, “at the word GO your challenge is to be the first person to remove all the tissues from the box. The winner will receive a large box of candy.”

At Go, four of the middle schoolers began to frantically remove the tissues from the box, one at a time. Joey, looking puzzled, watched his frenzied competitors for a moment, picked up his box, ripped off the top and pulled all the tissues out at once. Done!

When I asked him later how he came up with that idea he said, “It was the fastest way to get them out of the box.”

Here are 3 easy ways you can encourage critical and creative problem solving in your own kids.

END_OF_DOCUMENT_TOKEN_TO_BE_REPLACED And then all of a sudden – the nest is empty. The world around you is strangely quiet.

Where did all the time go? Where did my babies go? Will they ever come back to me?

While I know that in life there are no guarantees; I also believe we can raise our kids in a way that when they get older there is a good chance they will still love to hang out with us.

My husband and I may have got a few things wrong while raising our kids. We also did a lot right during this time. One of the most important one has been establishing a rock solid foundation for our relationship with all four of them.

Today, I want to share nine things that I truly believe helped us connect with our kids when they were little that have helped us stay close even now when they are grown.