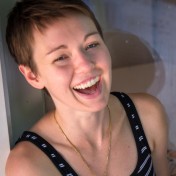 Tiffany Frye is the co-founder of nido durham (www.nidodurham.com), a coworking space with childcare in Durham, NC. She supports and mentors parents who want to craft a career that fits around their lives and honors their parent-self as well as their professional-self. You can connect with Tiffany at tiffanymfrye.com or on Twitter @nidodurham. You know how we have epiphanies as we grow older?

This simple realization has had a huge impact on my life.

Just recently, my parents and brother were in town for my daughter’s birthday. We were at dinner the night before her party, and my brother hadn’t put his phone down the entire half hour we’d been seated. I made a comment on this – that it’s not pleasant to share a meal with someone that can’t take their eyes away from their smart phones – and he stormed off, refusing to engage in any conversation.

This isn’t the first time he’s had a violent outburst of anger over a small conflict. As his family member, it upsets me that this happens so frequently.

I started to wonder why this might be. Did we not have good examples of conflict resolution growing up? Did we witness violent outbursts of anger? When I think back on it, I can’t remember my parents ever arguing. And while that may seem like a good thing, I think that may be where the problem lies.

In order to know how to handle conflict in a productive and healthy manner, we need models of healthy conflict resolution. While on one hand fighting and inflamed emotions only create pain, on the other, never seeing adults disagree means our children don’t know how to deal with conflicts at all.

Productive arguments and even conflict are good, and can bring us closer when handled well. Among the many things we teach our kids, how to resolve conflict without resorting to either drama or fighting, or just simply sweeping it under the rug to fester, is very important.

Here are some ways we can teach our kids to argue in a way that builds connections, instead of destroying them –