When was the last time you felt guilty and inadequate as a parent?

A year ago? Last week? This morning?

We’ve all been there.

You get a call from your child’s teacher, and they want to set up a conference about his behavior. And you can’t help but wonder what you could have done differently.

Your teenage daughter is not happy, and you just know it’s your fault.

Your son is struggling to make friends. If only you had been more attentive.

Your aunt criticizes your handling of your child, saying she would certainly be behaving differently in their house. And she probably wouldn’t have ADHD either. And you want to crawl into a tight ball.

Your toddler fell out of a high chair and hit his head. In the middle of a restaurant. With patrons all around. And you just…

That last example is mine.

We were just finishing up lunch and getting ready to leave when my rambunctious toddler tried to climb out of his high chair and fell backward, hitting his head on the floor. SPLAT.

As I grabbed him up into my arms and headed for the car, one lovely waiter offered to bring some ice. One woman followed me out to tell me that I should call 911 because his brain was probably swelling. “I’m taking him to the ER” was all I could utter.

Less than an hour later, my son was running around the exam room of the ER, trying to play with the instruments. They kept us for a couple of hours and said that he wasn’t showing any signs of a concussion.

As I thought back on the horrific scene, I remembered the eyes of the fellow patrons, with their hands to their mouths, shaking their heads in condemnation.

I had carried my son out of there in shame.

I replayed the moment continuously in my head, hearing the sound of his head hitting the floor over and over again. It seemed to reverberate in my mind.

If banging my head against the wall could have erased the memory, I would gladly have done so.

Instead, to save my own sanity, in the days and weeks following this incident, I devised six steps that helped me let go of the guilt and even equipped me to handle future guilt trips.

Here are six steps that you can use to let go of guilt and fear: As the scene replayed repeatedly in my head, the trigger for my guilt became obvious: my son’s fall made me feel like an incompetent parent. That I had failed as a parent. The fact that it was in such a public way only added insult to injury.

In analyzing this process, I have learned that identifying the trigger was the first step towards getting past the guilt.

2) When in Doubt, Reach Out

I decided to reach out on Facebook, posting about the incident to see if any of my friends had experienced this before. The stories and support came pouring in.

Apparently every one of my friends who had raised children had a story of their own to share. Those who knew me knew what kind of mother I was, and they assured me that “shit happens,” and the most important thing was that my son was fine now.

While Facebook and other social media platforms are notorious for generating ill-will, I discovered that they can also serve to support us when we need reassurance. I learned that when I am in doubt, I can reach out.

3) Recognize a Thought Pattern and Change It

Buoyed by support, I realized I needed to change my thought patterns, so I employed a technique that is called “Thought Records” in Cognitive Behavioral Therapy. The main idea of this technique is to evaluate arguments for and against a thought next to each other.

When I consciously thought about it, for every negative reason my brain conjured up for supporting the fear that I was an incompetent person, I could come up with several where I was doing a good job taking care of my son.

The restaurant scene eventually stopped playing in a loop in my head. I learned that I could recognize a thought pattern and change it.

4) Recognize When Your Ego Has Exerted Its Influence What made me more prone to guilt and shame in my parenting, while others could say “shit happens”?

For this I turned to the book The Conscious Parent by Shefali Tsabary, Ph.D. where she says

“None of us likes to be perceived as an incompetent parent. Our ego needs to be seen as a superlative parent. Anytime we feel less perfect than what we wish to be, we experience anxiety because we believe we have “fallen” in the eyes of others.”

Could the words have been more apropos? I found comfort in the chance to recognize when my ego had exerted its influence.

For me, my tendency toward perfectionism was deeply triggered when I felt that I had failed as a parent in such a public way. I learned that recognizing the pattern of behavior I tended to engage in when my ego exerted its influence gave me the space I needed to look at the situation from a more logical standpoint.

I’m a Reiki therapist and teacher, so in the days and weeks after the incident, my go-to when I wanted to get back to center was to do Reiki, but I also spent time in nature with my family, exercised with my son in the stroller, meditated before he woke up, and took a bath with healing salts after he went to bed (not all on the same day).

These activities allowed me to connect to my center, my balanced state. Self-care is key. I learned that connecting to my center gave me the quiet space that I needed to stop the guilty chatter and connect to the truth of who I am.

This in turn enabled me to find tools and devise strategies that helped me to get past the guilt.

6) If Possible, Remove Yourself From the Environment That Makes You Feel Guilty

Two weeks later, my husband and I returned to the same restaurant, one we had been going to since before my son was born. The waitress, who knew us, said “oh, I felt so bad for you. People think you’re a bad mom, and you’re not.”

When we tried to order a half order of our favorite dish for our son like we always had, we were told they wouldn’t make it for us anymore. When we asked to speak to the owner, we were told he was too busy.

By this time, I had arrived at the following conclusion: I am a competent parent.  Hell, I’m a damned good one. I had learned that it doesn’t matter what others think. So we left and found another restaurant.

Sometimes it is not as clear cut as a fall. Sometimes the trigger for our guilt trips and feelings of inadequacy is much more subtle. A comment from a family member or a look that your child gives you is enough to start a downward spiral.

Make an effort to identify the trigger anyway. And reach out to people that know you as a parent, that know your heart. A close friend who has been supportive in the past can do much to remind you of the wonderful parent that you are and pull you out of the funk.

And be sure to do whatever activity you can participate in that will help you to relax, slow down, clear your thoughts, and connect to the truth of who you are as a parent and a person. In fact, do that as soon as possible.

At the end of the day, we’re all human. We make mistakes. We worry that we’re not good enough. If we can’t see these experiences as an opportunity for growth, how can we effectively guide our kids to do the same when they make mistakes?

For today’s contemplation exercise, pick any incident from the recent past that made you feel guilty and ask yourself these questions: 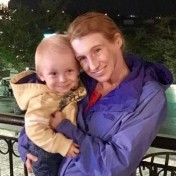