When I see my kids deliberately hurt by someone else the mama bear just comes roaring out in me. No one hurts my babies.

But what do you do if your baby hurts your other baby? How can you make them stop hitting?

The first time I saw this happen, I died a little inside.

I was in the bathroom and heard one of the twins cry out in pain. I ran into the living room, only to find my two year old stomping on his brother’s back.

And I lost it.

I screamed and hollered and removed him from his brother and set him roughly on the couch. The anger I felt towards my two year old – a little boy I loved and cherished – was unfathomable.

The mama bear came out – even against her own.

And I hated it.

But by then the damage had been done.

I was not able to get him to stop hitting in time, and now his twin little brothers had learned to hit – and they usually hit each other.

And guess what? Mama bear was still in there.

Every time one boy hit the other, I lost it. The anger bubbled up and boiled over. No one hurts my babies – not even my own sons.

A few months ago, I quit my part-time job and found myself as a stay-at-home mom. My first order of business: to get them to stop hitting.

I knew how to do it. I just never did it because it takes time.

How many times, as parents, do we know the appropriate tool to use, but don’t even bother, because it takes too much time out of our busy day?

Instead, I consistently told him not to hit, hoping that would be the end of it. “Instead of helping our child with his feelings…we say sternly ‘No hitting! Hitting hurts!’ and hope that’s the end of it. Except it isn’t the end of it! You can count on him hitting her again, because he still has all those monstrous feelings. They are at war within him. But that doesn’t mean he’s a monster! It means he’s a small child trying to manage feelings that have undone many older humans.”

I felt awful! If only I’d have invested that time years ago, when the two year old was hitting. He needed me to help him manage those monstrous, overwhelming feelings. But I didn’t know how.

If I had, not only would I have stopped his behavior, but he would never have taught the twins how to hit. And I wouldn’t be dealing with their hitting behavior today.

When I finally buckled down and addressed it, it only took two weeks to get them to stop hitting each other.

Two short weeks to correct their behavior. And to keep mama bear hibernating, safely where she belongs.

For children, hitting is a tool they can use to get their needs met and express how they are feeling. And for my boys, hitting became their go-to method of expressing their emotions.

Kids, especially younger kids, usually hit when they feel emotionally overwhelmed. The emotions they are feeling are so strong they lack the verbal capacity to say what they feel.

Dr. Joan Simeo Munson wrote on her blog, Empowering Parents, “Many times kids who display aggressive behaviors simply lack the communication skills necessary to help them through a stressful situation.”

So, what’s the key to getting them to stop hitting?

It’s 5 simple tricks that will give your child the ability to express what they are feeling, without hitting.

Trick 1: Listen to Your Children My twins hit when they are angry or frustrated – usually with each other. So I listen and watch for arguments that may develop into hitting and be ready to intervene before it gets out of hand.

It’s a tricky skill because it’s good to let kids try to work it out themselves before you intervene. The trick is to stop them if you can see that hitting will emerge as their go-to tool and give them another option to solve the problem instead. The more you observe them the easier it will be to forecast when a solid smack is coming.

“I see you are feeling upset right now.”

“I see you are feeling angry with your brother.”

“I bet you are frustrated because you can’t get that truck hitched up to the trailer.”

If your child gets overwhelmed when he is excited or embarrassed, help him identify that feeling as well.

“I can see you are super excited to go on that field trip today!”

“Your cheeks are pink and you look like you want to hide right now…are you embarrassed about what just happened?”

After he’s named his anger or excitement, help him to explain what he is feeling to you.

Sit quietly while he talks. Try not to put words in his mouth. Ask open-ended questions, rather than questions that can be answered with a yes or a no.

“I see you are upset right now. Can you tell me what’s going on?”

“I bet you are frustrated because you can’t get that truck hitched up to the trailer. Can you tell me what you need?”

“I see you are excited to go on that field trip today! What it is that you are looking forward to?”

“Are you embarrassed about what just happened? Should we go somewhere quiet so you can tell me about it?”

Do not show judgement – what he feels belongs to him and is neither right nor wrong. Be sure to validate his feelings – show him that it is normal and okay to feel what he is feeling.

Trick 4: Give Your Child a Replacement Tool Hitting is not an option. If you intervened right when your child was about to hit, or right after he hit, you may need to explain to your child why hitting is against the rules and why he must stop hitting. Ask him to repeat this back to you so that you can be sure he understands. Then give him another tool to try instead.

If your child is older and has some reasoning skills you can ask him to come up with something he can try instead of hitting. You’d be surprised at what your child will think up! When he is calm, he can think rationally – and most likely already knows what he could do differently.

“I see you are feeling angry with your brother for taking your ball. I understand why you wanted to hit him, but you know hitting only hurts the people we love. You need your ball back. What would be one thing you could try, to get your ball back?”

If your child is too young to problem-solve on his own, just hand him the correct tool.

“I see you are feeling angry with your brother for taking your car. I bet that made you mad! But you know we can’t hit – it’s against the rules. Let’s try telling your brother that he can have a turn with your car when you are finished with it. Maybe then he will give it back to you and wait for his turn.”

Trick 5: Praise Your Child When You Catch Him Using the Appropriate Tools

It’s a lot of work for us parents to drop whatever is on our plates at that given moment and coach our children through these overwhelming feelings. But it’s even more work for our children! Taming run-away feelings is exhausting. There’s a new skill to learn and old habits to break. We all know how hard that can be!

Be sure to sincerely praise him when you catch him using the appropriate tool.

“Honey, I just saw you ask for your car back rather than hitting your brother! And look! It worked! You have your car and nobody got hurt! Nice job!”

Replacing hitting with the appropriate tool isn’t going to work every single time. Sometimes the other player just does not cooperate. These situations will take more coaching on your part – you will need to coach both brothers as to the appropriate actions that they should be taking.

But in doing so, be sure to first offer words of encouragement to the initiator when he tries, but falls short.

“Oh, honey, I see you tried to ask your brother for your car back. I know he took it from you and won’t give it back to you. Thank you for keeping your hands to yourself! Can I help you talk to your brother?”

Give your kids the words and the tools to express how they are feeling and to get what they need out of the situation, and you should see the hitting dissipate.

But the key is to be consistent. You can’t help them work through it once or twice and think “good enough.” You need to help them through it every single time, until they show the understanding and the ability to use the skill on their own. Once they show some success in stopping themselves you can back off a bit and let them try it on their own.

Did you catch Leeza Steindorf’s lovely talk about Teaching Kids Conflict Resolution Skills at this year’s Positive Parenting Conference? If you have the recording package, be sure to take a look. If not here are some details.

It’s easier than you think to implement the steps needed to help your kids stop hitting!

Think back to the last time you heard your children fighting. What words were they using? Or not using? How frustrated or angry do they sound? Does it sound like they are able to use their words to work it out?

Think about at what point you intervened. Was it before the hitting started? After? Were you able to quickly help the prospective hitter identify his feelings? What kind of replacement tool from the step above do you think could have helped?

Keep a mental or written journal of when your child hits so you can look for patterns. Is it when he is angry? Embarrassed? Feels powerless? Tired? When does your child lose control of his emotions?

Then set him up for success by preventing those situations as much as possible.

For example, make sure he is well-rested if exhaustion causes him to lose control. When he is tired make sure he is supervised when he is playing with his siblings, so that someone can intervene when he feels powerless or angry.

Help him to identify his feelings and teach him how to appropriately express his feelings, both physically and verbally.

Do this with all of his feelings, not just the feelings that trigger the hitting.

It’s going to take time for him to learn a new skill. It will help if you know what triggers the hitting in the first place, and can prevent it from ever happening. When it does happen, you need to act quickly to offer support and guidance by using the steps above. 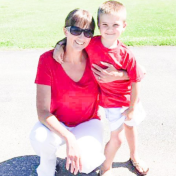 Shannon Lambert is a social worker and a freelance writer. She has six boys; the youngest two are twins. She blogs about parenting and self-help for moms at MakingMommas.