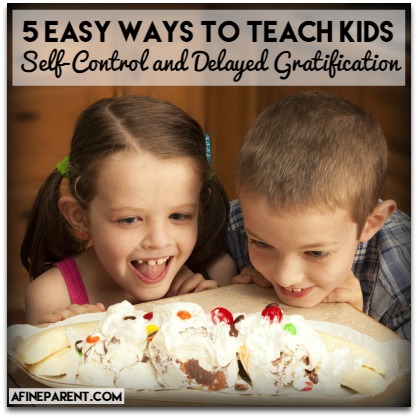 Let’s be honest: children sometimes suck at being patient.

I know mine do.

Unfortunately, their lack of patience and self-control can become contagious to us adults, too. I admit that I’m prone to snapping, “Just wait a minute!” when my kids are screaming because I take too long to cut their grapes.

And before I know it, it becomes this vicious cycle—my children’s impatience makes me impatient, which in turn makes them more impatient, until it spirals out of control.

I know I can’t indulge them when they whine instead of waiting quietly – like all parents, I do believe in teaching kids about self-control and delayed gratification.

But, the way I sometimes go about it isn’t quite right.

Editor’s Note: For more about the most effective ways to teach kids delayed gratification and more, click here for our FREE mini-course How to Be a Positive Parent.

Instead of expecting 2- and 3-year-olds to magically acquire self-control skills overnight (that would be cool though, wouldn’t it?), I need to model and teach these skills to them.

Marshmallow Test: The Famous Study in Self-Control and Delayed Gratification

Psychologists have studied why some kids seem to excel at demonstrating self-control and delaying gratification, while others struggle for long time now. Have you heard of the famous “marshmallow test” conducted by Walter Mischel and a team of researchers at Stanford University in the late 1960’s and early 1970’s?

[Note from Sumitha: Here is a video of the marshmallow test in action. It’s not from the original study, but captures the kids reactions sooooo well.]

The researchers continued to follow up with the children for the next several decades. They found that the 4-year-olds who had successfully waited for 15 minutes differed in significant ways from the children who couldn’t wait. Over the years, the children who had “passed” the marshmallow test developed the following characteristics:

So, is the lesson that some people are born with better self-control, and that this trait determines their entire life trajectory?

Walter Mischel concluded that “preschoolers tended to wait longer when they were given effective strategies.”

In other words, self-control and delayed gratification are essential life skills — but they can be learned.

This finding is good news for us parents! It means that we can actually do something positive to teach our kids about delaying gratification.

So what was it that helped kids delay gratification? Based on my reading of the studies, here are the 5 research-tested strategies that I am trying with my own kids. When the researchers covered the marshmallow, the children didn’t need special strategies to avoid eating it. They just weren’t tempted when they couldn’t see it—thus proving the old proverb “out of sight, out of mind.”

So something as simple as hiding temptations from your children’s sight—whenever possible—is the most effective way to stop them from becoming overwhelming. Put chips and cookies away in the cupboard if you don’t want your children to whine for more. Stop checking Facebook all day on your iPad if you want your kids to limit screen time.

Removing temptation may sound like a cop-out, but as your children get older, you can explain the purpose of this strategy to them so that they can internalize it and start consciously doing it for themselves.

Parenting experts often tell us to dangle rewards before our children. I’m sure you’ve heard it before: “Don’t punish bad behavior—just reward good behavior!” When the going gets tough, we’re supposed to remind our children of the stickers and M&Ms that they want to earn.

But in the marshmallow test, the researchers found that children were less likely to wait when they were encouraged to think about the desirable properties of the reward (such as “the marshmallows are yummy and chewy”). Obsessing over the marshmallow made children want to eat it.

So if you want your child to wait patiently for a reward, don’t emphasize the reward that your child is waiting for. For instance, the next time you’re at the grocery store, don’t tell your children, “If you’re quiet, you can have a piece of delicious candy when we’re done.” Thinking about candy will make them want to grab all the candy they can well before they make it to the checkout line! Try a different strategy in a situation where you can’t give the reward right away. Children waited longer when the researchers told them to “think fun thoughts.”

Some of the children decided to “just sing a song” or “go to outer space.” Others distracted themselves by thinking of a different food—for instance, if they were trying not to eat a marshmallow, they talked about pretzels. In one version of the test, some children were given a Slinky to play with while they waited—and the majority of children with a Slinky successfully waited 15 minutes.

In another version, the researchers tried to distract the children by instructing them to think negative thoughts—for instance, to think about falling down and hurting themselves.

The children in this condition were terrible at waiting for the reward. The stress of the negative thoughts apparently led them to console themselves with the marshmallow. Thus, trying to distract children by reminding them of punishment or other negative consequences may backfire.

The lesson? Distraction can work, but it should be fun rather than stressful.

Children waited longer when instructed to think of the marshmallow in an abstract way—for instance, as a picture, or as a cloud. Walter Mischel theorized that abstraction helped the children to “cool” their desires for the snack by emphasizing intellectual strategies over “hot” emotional reactions.

If your children focus on a temptation that you can’t hide or avoid, encourage them to consider the object’s abstract properties rather than its tempting properties. For instance, if they’re staring at the TV set, pleading for you to turn it on, ask them what shape it is and lead them on a scavenger hunt for similar shapes in the house. Or tell them to imagine it as a magic picture frame and ask what pictures they “see” in it.

But remember that the children in the original study were around 4.5 years old. This strategy probably works best with children age 4 and up, not with 18-month-olds who haven’t developed abstract thought yet. Parents should therefore teach phrases that are easy to repeat and that remind children to control their impulses. For instance, if you don’t want your child to beg for endless amounts of cookies, tell her in advance that she’ll only get one, and ask her to repeat the phrase “just one cookie” before you give it to her. Then, if she finds the limit to be stressful, she can repeat “just one cookie” to herself.

As you can see, these strategies aren’t particularly difficult to understand. They’re just as straightforward as teaching our children their ABCs—and may be even more fundamental to their academic success. If Mischel and his researchers were able to teach some kids to apply these strategies in a single 15-minute session, surely we can succeed with our own children.

The important part is to be consistent in applying them. Another psychologist who studies self-control has compared it to a muscle—which means that it can strengthen with exercise.

By helping our children apply their best self-control strategies to delay gratification in everyday situations, we help them to develop better self-control overall. 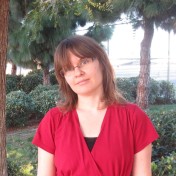 Sarah Ramirez is a freelance writer in Los Angeles. Her PhD is in political science, but she became interested in parenting research after becoming a mother of two (soon to be three!) children. She blogs at www.selfregulatedchild.com.