Doesn’t it sometimes feel like it’s impossible to be a parent and not multitask?

As the mother of two very active children, aged 7 and 3, multitasking is not only a necessary evil, but crucial to me. When you add in the fact that I opened my own one-woman court reporting firm in July 2015, plus I have a host of health issues, things become much more difficult.

My husband is not only understanding, but does more than the average bear around our home. That doesn’t change the fact that, as Mom (Momma, MOMMYYYYYYYYY!!!!, MOTHER!), I do 90% of the listening-to-every-sound-and-analyzing-it-for-potential-likelihood-to-cause-death-or-dismemberment / organizing of activities & rides to and from activities / generalized and often unnecessary worrying around here.

And since I work from home, I also do a great deal of the housework.

All of this obviously requires a heck of a lot of multitasking.

I need to be able to change a diaper while I listen to my older child’s long – and I mean, like, I’m-not-gonna-be-able-to-attend-your-4th-of-July-party-because-I’ll-still-be-listening-to-this-story-my-7-year-old-is-telling-me long – story about some kid I’ve never heard of who pushed down some other kid I’ve never heard of, the story ending with, “And then my hand started to hurt,” which has ABSOLUTELY nothing to do with anything she previously said, and I have to be able to convincingly feign understanding while avoiding being peed on by the diaperless one.

And I know I’m not alone.

In a lot of parenting situations, multitasking is completely unavoidable.

So, What’s Wrong with Multitasking?

When I was growing up, multitasking was touted as a “skill,” and those most adept at multitasking were heralded as the kings (and queens!) of their industry.

Recent research however is showing that multitasking is actually detrimental to productivity, and even damaging to the brain itself.

In an article published on Forbes.com, Contributor Travis Bradberry – who is a published author, a cofounder of TalentSmart, and consultant on emotional intelligence – states that multitasking can lower your IQ:

A study at the University of London found that participants who multitasked during cognitive tasks experienced IQ score declines that were similar to what they’d expect if they had smoked marijuana or stayed up all night. IQ drops of 15 points for multitasking men lowered their scores to the average range of an 8-year-old child.

Even if that’s the only consequence to multitasking, it’s still pretty terrifying.

For example, losing just a half second of time to task switching can make a life-or-death difference for a driver on a cell phone traveling at 30 MPH. During the time the driver is not totally focused on driving the car, it can travel far enough to crash into an obstacle that might otherwise have been avoided.

It’s not just your safety that’s at risk, either; you could be irreparably damaging your marriage and/or other personal relationships. In an article published by the Journal of Social and Personal Relationships, authors Przybylski and Weinstein state:

…the presence of a diverting influence such as a mobile phone may inhibit relationship formation by reducing individuals’ engagement and attention for their partners, and discouraging partners’ perceptions that any self-disclosure had been met with care and empathy. Indeed, such an impediment to relationship formation may be frustrating and isolating.

In my own experience since starting my business in 2015, attempting to multitask – for me, meaning doing anything work-related while also caring for my children – was completely counterproductive. I got angry at both of them because they wouldn’t stop asking questions or fighting or spilling things for 10 seconds, which is entirely unfair.

They got angry with me because they were bored and craved more attention and nurturing from me, which I couldn’t give and also meet deadlines. Also, completely unfair. Conversely, I noticed the more attention I devoted just to my children, without touching my phone or looking at my Apple watch, the more well-behaved they were.

So, I tried to beat my multi-tasking habit.

Once you get used to it, multitasking is a tough habit to beat!

I Started by Asking Myself Some Tough Questions In my quest to be both a successful mother and wife, and a successful court reporter/business owner, I had to ask myself a few tough questions:

1. Why did I go into business for myself?

In a nutshell, I wanted more freedom and more time with my kids and husband. I wanted more control over my schedule, more say in who I worked with and what kinds of cases I encountered, and I didn’t want to spend my kids’ VERY SHORT childhoods working nonstop.

2. Has starting my own business actually helped me work toward the goal above?

The answer to this, sadly, was a resounding NO. If anything, I was more stressed and working even more hours than before. This is fairly common when starting a new business, and I knew it would be rocky at first, but if I was/am going to make any progress toward the life I really wanted, I had to/have to make intentional choices to lead me there.

3. What can I do to set myself on the road to the life I really want?

Much harder question to answer, and for a long time I didn’t feel like I had the TIME to sit down to even think about this! Around November 2016, though, I became entirely burnt out. Working was no longer exciting to me, it was a burden, and so was everything else. The stress caused by my inability to juggle everything and be the perfect business owner/wife/mother/sister/daughter/aunt/crafty-crafty mom was causing my health to go even more downhill. There was no solution BUT a solution, if you know what I mean.

When I examined the three questions above, I realized that I was spreading myself WAY too thin, and nothing I was trying to accomplish was getting my full attention, least of all my kiddos. That’s so sad to write, but it’s true. I was multitasking in an effort to accomplish more, but I was accomplishing bupkis.

So I started setting some limits.

10 Simple Tips for Setting Limits Effectively That Have Helped Me

This is, and will always be, a work in progress.

We all possess the tools to raise our children in exactly the way they need to be raised, even if that means the floor isn’t as clean as we’d like or we miss a deadline now and then.

And sometimes that also means sitting our kids down and explaining that there will be times when Mom or Dad has to work late or go out of town, and that they need to learn to be respectful of that and to be flexible.

Will we ever be able to give up multitasking entirely? Probably not.

But being aware of its side effects and being intentional in our efforts to focus on one thing at a time – and then remembering to forgive ourselves when we don’t get this completely right – is a huge step in becoming better parents, and better people in general.

The road to monotasking is not a short one, and it can seem daunting. Try breaking the journey into manageable pieces, beginning with answering the following questions:

Don’t answer the above questions with the intent of solving the entirety of the problem. Just identifying these areas is a huge step!! Be honest, and keep the answers as simple as you can.

Over the next week, keep the following in mind and try to jot down ideas:

As with all new things, don’t expect to get this perfect, or even right, on the first try. It will take some tweaking and some self-examination and some time to get in the habit of only doing one thing at a time.

But being more mindful of what you’re doing and how you’re doing it will add so much value to that activity, and you will eliminate a lot of stress. 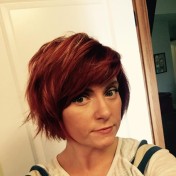 Cortney Kilby owns Kilby Reporting, Inc., a freelance court reporting agency serving Eastern Iowa and Western Illinois. She and her husband Brian were married in June 2003, and have a 7-year-old daughter and a 3-year-old son, both with flaming red hair and personalities to match.
When not running from deposition to deposition and/or editing transcripts -- or going from dance class to soccer/basketball/t-ball to Girl Scouts -- or saving her son from eminent death via jungle gym/eating spare change/running headlong into the street/being accidentally impaled by his sister who seems to operate without regard for the existence of other physical objects or lifeforms -- Cortney enjoys sleeping (because: Narcolepsy), using the bathroom alone and starting 10 craft projects at once, none of which will ever be completed. Cortney is known for having funky hair colors, and has what others have described as "an unhealthy obsession with day planners and office supplies in general."