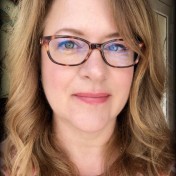 Heidii McMichael has taught English to high school and college students for over twenty years, and now she is flipping the script and writing her own literature instead of just teaching young adults how to analyze it. Find her at www.heidiimcmichael.com or in Livermore, California, where she resides with her husband and three young daughters. When I was a sophomore in high school, my parents sat the family down in the living room, opened up an enormous binder and asked my younger brother and me to pick a sister, any sister, from any country around the world.

We chose an eighteen-year-old, trumpet-playing, tall and strong-minded Finnish student who did, indeed, become a real sister to me over the course of the following year.

My parents had made rumblings in the past about hosting a foreign exchange student. We lived in a tiny, rural town in Central California, so they saw the exchange experience as a double-blessing: My parents could share the wealth of our small-town lives and the beauty of our diverse state while culturally enriching their own children’s lives. We had previously hosted a German teacher for a summer, and my brother’s baseball team had provided temporary housing for players from Russia — the USSR at that time. We were no strangers to strangers in our home.

But when the day finally came to choose the exchange student, I was nervous about the change. My life was filled with academics, sports and other extracurriculars, and my parents both had busy jobs in addition to being key participants in their children’s activities.

This experience was going to put me outside my comfort zone, and I wasn’t sure I would like it. Would there be enough room for another sister?  Would my parents have enough love to go around?  What would we gain by shaking up our seemingly comfortable lives?

As it turned out, quite a lot! While that year certainly came with ups and downs—as they do in any family—the lifelong friendship, the bond of sisterhood and the cultural experience I gained from having Karo in my life outshone all the extra squabbles over the shared curling iron.

It was such a worthwhile experience, that here we are, over 30 years later, preparing to choose another sister. Only this time, it’s my own family—my husband, myself and our three daughters. And this time, there will be no binder, no leafing through pages of possibilities, since we have already chosen our sister-for-a-year: Karo’s daughter from Finland. END_OF_DOCUMENT_TOKEN_TO_BE_REPLACED When I was a kid, summer was freedom.

My family occasionally took a vacation to some nearby destination, like San Diego or Pismo Beach, but for the most part, we were left to our own devices, told to “just go play” or take a dip in the backyard pool.

We raced each other into the house, our hair waterlogged and our skin bronzed or maybe a little burned. We dropped our towels on the floor and stood with arms spread wide in front of the swamp cooler until our goose-bumped bodies could take no more.

My brother and I weren’t “free-range” children, by any means, but we were carefree and even a little bored every now and then.

There were homemade popsicles and unprofitable lemonade stands; there was digging for rocks in the bottom of the creek bed; there was riding the tire swing like there was nothing more important in the world.

And, in truth, there wasn’t.

Summer revolved around the most unimportant things imaginable, but they were everything to us. What made my childhood summers so memorable was that they truly felt like time off from the real world, like a vacation not only from school but also a reprieve from constant activities and the watchful eye of my parents.

When I had my own kids, I tried to replicate that feeling of freedom that comes with warm weather and no homework, but I wasn’t terribly successful.

I organized playdates and arranged to meet friends at the public pool—but only on Fridays because the other days of the week the kids attended music class or science camp. I greased up my three girls with sunscreen and watched them play in the sandbox for thirty minutes—but then remembered they had ballet or karate or swim lessons. Playtime was over.

As a modern-day mom, this was “freedom” for my kids: I provided them with minuscule pockets of playtime, but I master-minded nearly every moment. We were all exhausted by the time school started in August.

So, as modern parents who have a lot to juggle and multi-task, how can we strike a balance between the nonchalant “just-be-home-for-dinner” attitude many of our own parents employed and the micro-management some of us tend toward now? And if our kids are so used to our over-parenting, how can we raise an independent child that can enjoy a summer of creativity and curiosity, without them whining “I’m bored” all the time?

END_OF_DOCUMENT_TOKEN_TO_BE_REPLACED

Three kids. Two cats. One dog. Zero time to fret about myself and my job, let alone the state of our home.

But fret, I must, if I want a calm, clutter-free home.

My husband and I have three daughters, evenly-aged at twelve, ten, and eight, and a few years ago we found a chore schedule that transformed our household chaos and empowered our kids to make valuable contributions to our home.

I believe that while parents should expect their kids to help around the house, the skills that children gain by performing regular housekeeping tasks are crucial for character development. Chores help kids become responsible adults. Julie Lythcott-Haims, a former Stanford University dean and author of the recent bestselling book titled How to Raise an Adult: Break Free of the Overparenting Trap and Prepare Your Kid for Success, says in her TED Talk that kids (and parents) should be less obsessed with things like school grades and test scores and more focused on things like love and chores.

“Did I just say chores?” Lythcott-Haims asks her TED audience, and indeed she did because the Harvard Grant Study, one of the longest longitudinal studies ever conducted, found that kids whose parents asked them to perform household duties were more likely to find professional success later in life.

And the earlier they start, the better, Lythcott-Haims argues. Kids need to feel like they are an integral part of the home. Giving them regular, age-appropriate tasks will instill in children a sense of community and shared purpose, a deeper understanding of responsibility, and the “grit” to accomplish a task that might seem daunting.

Our family had switched chore strategies faster than our clothes, mostly because one approach was fine for our older daughters but too complicated for our youngest, or another method was too “childish” for our big kids but just right for the littlest.

Before our family found this successful strategy, we had tried magnets-and-fridge chore charts, stickers-and-happy-faces on paper, and plain, old shouting out to anyone within earshot, “Can someone take out the stinky trash, please?!”

Sometimes, our charts were so complicated that even my husband and I couldn’t make heads or tails out of which kid had performed what job. It became so frustrating that I often resorted to doing every chore myself, and most parents know that when one family member is trying to hold everything together, things fall apart.
END_OF_DOCUMENT_TOKEN_TO_BE_REPLACED