You know that one of the most important character traits we can teach our kids is personal accountability, but how?

Accountability is a hard enough concept to explain to a child, never mind teaching them how to make it an integral part of their inner guidance system. If you feel like you are missing out on opportunities to teach this because you’re not sure where to start, you’re not alone. The task does seem daunting.

In my years of parenting, I’ve learnt (and in many cases, mastered) how to nurture and care for my kids. I have potty trained four kids (my kids are 6, 8, 24 and 27) successfully without bribing them with presents (except new underwear and tons of pride). I have spent a lot of time working on how I discipline, not yelling and shaping how I phrase things to avoid hurting their self-esteem. I have taught them the basics of good character – to say please and thank you; to be generous and kind; to maintain a level of humility, and to say they are sorry and fix things when they know they were wrong.

It’s time now to take on some of the more abstract but equally important concepts. Personal accountability is at the top of my list. There is no point after all in raising our kids to achieve great levels of success if they won’t hold themselves accountable to their actions.

Why is Teaching Personal Accountability Important?

Consider for example the Tyco CEO Dennis Kozlowski who stole more than $120 million dollars from company funds, gave himself bonuses of $80 million, which of course was not approved by the company directors, and still claimed innocence. Found guilty in 2002 and sentenced up to 25 years in prison, he maintained that he did nothing wrong.

Another colossal example of a lack of accountability is the BP oil spill in 2010, which dumped more than 180 million gallons of oil into the Gulf of Mexico. Their accountability had to be forced by a federal court that ruled the company was grossly negligent and that they were cutting corners to boost their profits. Though they were responsible for $58 billion in court fees, penalties and clean-up costs, it does not make up for the impact to our environment, all of the wildlife that was lost and the devastation to the livelihoods of fisherman in the Gulf.

I don’t want to be raising kids who go on to achieve great success, but do so with no regards to what is right or wrong. Personal accountability is an important trait in my opinion, and I wonder if we parents are doing enough to teach it.

Here’s the deal though. It is a rather abstract concept to teach. Also, personally, I myself am a work in progress. And because of that, the first step in my “mission accountability” was the hardest.

Bonus: Click here to download a free printable version of this article to use as a “quick reminder” for your personal accountability mission.

Ask Yourself Some Tough Questions

Say your son is arguing about cleaning up toys scattered all over the living room floor. He is tired. His face is red, eyes are welling up with the promise of fresh tears and there are signs that an emotional meltdown is imminent if you pursue. Do you hold your parental ground until the task is done?

If you are like me, the answer is a defensive, “sometimes”. I am human. I am also a mom of four and I have my breaking points where I just surrender. By the end of the day, I feel like my mission is to simply keep everyone happy and injury-free until I can tuck them into bed. I don’t want another loud, weepy cleanup session that lasts for 45 minutes because they are moving at the speed of a slug caught in slow motion replay.

I hear myself say “That’s great, let’s keep going! We are almost done! Don’t forget that pile over there.”

They sometimes look at me with a bit of contempt, sputtering about how I am not being fair, how tired they are and how long it is taking to get their task complete.

They start pointing fingers at each other. One of them declares he never played with the Legos, so he certainly won’t be cleaning that up. The other, not wanting to let him get away easy, charges in with “you did too”.

Slowly my resolve to enforce the cleanup rule is becoming weaker. Holding yourself, and those around you, accountable is not easy for any of us. Sometimes, I fail at it.

I have a burning desire for some peace and quiet. I don’t want to arbiter who used which toy and is responsible for cleaning which part of the mess. I stop caring.

I take the easy way out because avoiding one more emotional confrontation is worth anything, including picking up the mess myself.

Small as the issue may seem, I’ve let my kids get away from taking personal accountability for their role in cleaning up the mess they’ve made. Worse still, because we have a cleanup rule in the house, but letting them off the hook, I am sending them the message that they can get away with breaking the rules.

I think to myself “just this once”.

But that’s not the case is it?

Why? Because every time you waver,

None of This is Easy, At Least Not at First If your children are like mine, they possess the skills to make this lesson as difficult as possible. Mine can argue their case like a gifted attorney and are armed with about one million Legos to unload all over the living room floor each night just to challenge it.

Who dumped the Legos? Was it a group effort or did one child do most of the damage? Is someone being roped into the cleanup who did not actually play with any of the said Lego-mess on the floor? Suddenly I am half parent, half detective.

The trick is to get your kids to the point where they recognize what they are each personally accountable for, so you can turn in your detective badge.

They need to know that this responsibility goes for any task; taking out the garbage, putting their dishes in the dishwasher, cleaning their room before they get to do any special activity and even owning up to when they make a mistake or a poor choice in behavior.

My job is to teach them ways to develop in character, and I develop as a parent the more I hold myself accountable for what they know, and do not know, about being a responsible human being.

I believe that there are many ways that a parent can still cut themselves a break, like ordering take out for dinner, extending bedtime on special occasions or holding those exhausting birthday parties at the local playground rather than bringing 15 children into your home. But cutting corners on important lessons regarding your child’s character is not the way to provide yourself that much needed break. In other words, don’t surrender because it is easier!

You are accountable for your children learning accountability. So, where do we start? Breaking down the concept of accountability in a way that kids can understand it is a good place, in my opinion.

When my son was bullied on the school bus it was both upsetting and confusing to him. The other boy had been picking on him and one day decided to knock my son on the head with a large toy truck. Later, the child denied the incident and even said he did not own a toy truck.  Even after the truck was discovered in the boy’s backpack, he continued to deny the incident.

I used this moment with my kids for a discussion about accountability and how it feels when someone does something to you and does not own up to it. Discussing those feelings drove the message home for my kids. I think it taught them a little about empathy for others feelings when they make bad choices and someone else suffers because of it. Realizing their behavior can cause discomfort to others is a great way to prompt your child to be accountable for their actions in the future.

Great, Now How Do I Teach Them to Actually be Accountable?

At empoweringparent.com, counselor Megan Devine, suggests parents create a culture of personal accountability within their home, which means that everyone in the family is responsible for their own behavior and actions.

This means everyone must follow house rules and expectations and will be held accountable for how they behave during arguments. The idea is that by setting a culture of accountability, kids avoid that negative pattern of justifying their behavior with excuses and learn instead to take responsibility.

Here’s the breakdown of what we need to do:

Like all parents, I dream that my kids will grow up to be happy, raising families of their own and successful in whatever they choose to pursue. And whether it is personal well-being, the joy of family or success in a career – I know they won’t get too far without taking personal accountability for their actions. It is a difficult lesson to teach. But, when I consider the implications of not teaching it, I’m willing to put my weariness aside and dig in my heels.

Bonus: Click here to download a free printable version of this article to use as a “quick reminder” for your personal accountability mission.

Ok, so for our 2-minute action plan, here are the questions –

I believe as a parent, the determining factor in raising someone to have this precious character trait is to explain its value (not just “because I said so”), discuss how people who lack accountability make others feel, and set expectations for accountability as well as consequences for when they are not met. We need to lead by example and hold ourselves accountable to guiding the growth of our children’s character.

Monitor your success, and theirs, for the next week. Move forward to another rule or expectation when you feel the first one has been well established. Offer positive reinforcement and praise when you catch them being responsible and never give up. We are all works in progress. 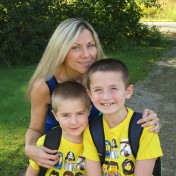 Barbara Leech is a mom of four who gave up her career as a staff reporter and editor of two weekly newspapers in Southern New Hampshire to be a work-at-home mom. Her mission was to be the best mom she could be, but that mission is still not complete as of press-time. She is a freelance writer for magazines, newspapers and websites, an editor and copywriter for medical and real estate websites and a blogger about parenting, having a freelance career and surviving and thriving with lupus.