How capable are your kids?

I’m not talking about their math ability or how well they throw a baseball.

Can they operate a vacuum cleaner? Cook a meal? Lodge a complaint? Change a light bulb?

Many kids today live a life of entitlement. Very little is asked of them in terms of responsibilities at home.

I know, at least in my house, this is mainly due to parental laziness. It’s much easier to do a job myself, especially if I want it done right (interpretation – the way I think it should be done).

I get tired of nagging, demanding, and threatening. Consequently, instead of teaching kids responsibility, I accept half-hearted efforts because, well, at least they did something.

My kids have very few responsibilities in the real scheme of things, yet they claim that kids at other houses aren’t enslaved as they are in our home. Hmmm…

Raising a Generation of Entitled Kids In her book, Cleaning House: A Mom’s Twelve-Month Experiment to Rid Her Home of Youth Entitlement

, Kay Wills Wyma cites the frequency of young adults who quit jobs because they don’t like them and throw away educations because they’ve changed their minds.

28% of 22-29 year olds rely on money from their parents to fund major expenses. They move home and freeload expecting their parents to take care of them. They don’t feel responsible for paying the bills, especially if it means taking a job that is hard and doesn’t pay well. In 1970 80% of American women left home by age 24, by 2007 that number had risen to age 29.

Wyma asks — Why should they? Isn’t the world here to serve them? Aren’t they entitled to a strife-free happy life?

She makes a point. I know my own kids are indignant when I ask them to do a chore not on their assigned list.

But Wyma takes the argument another step.

END_OF_DOCUMENT_TOKEN_TO_BE_REPLACED It’s a bit embarrassing when someone describes your kids in ways that are less than complimentary, isn’t it?

“She really tells the other kids what to do, doesn’t she? A right little bossy boots!”

You instantly feel the need to justify your child’s behavior, but later you wonder…

You wonder if your child really IS bossy.

You wonder about your parenting techniques and if you’re on the right track.

You wonder if you ought to be doing something when you see your child being assertive the next time.

My own daughter is strong willed and opinionated, and I wonder.

I watched her this morning, telling her younger sister what to do. She bossed her about mercilessly, all morning. The younger one took it very well, and largely did her sister’s bidding. But eventually she got sick of it, and grew mutinous. It’s then that the Boss’ behavior deteriorated, and she became rude and disrespectful.

That’s when my blood started to boil.

I don’t want domineering children, but I don’t want to squash their spirits, either. I want them to know it’s ok to have an opinion and be strong-willed.

But, in spite of myself, I almost labeled my daughter as bossy. I stopped myself in the nick of time — “bossy” is a lousy label to carry around.

As Facebook COO Sheryl Sandberg says, words like bossy send a message: it’s not ‘right’ to ask for what you want. It’s selfish. When we label behavior in this way, our children believe that behavior is ‘bad’ and ‘wrong’. Their self-esteem wears away, and their confidence slowly dies.

That’s not what we want.

As quoted in the Yahoo article “Since when did obedience become the epitome of good parenting?“,  Alfie Kohn, the author of Unconditional Parenting: Moving from Rewards and Punishments to Love and Reason

says that when he asks parents what their long-term goals are for their children, “No-one ever says mindlessly compliant.”

So how do we strike that balance as parents?

How do we teach our kids to express themselves without being bossy?

The answer is to help them to state their feelings in a way that is polite and courteous. Here are some things that I find helpful with my strong-willed daughter –

END_OF_DOCUMENT_TOKEN_TO_BE_REPLACED 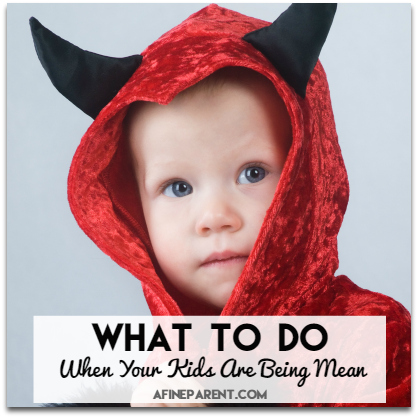 Have your kids ever said something so unexpectedly mean that it made you recoil with horror?

When our second daughter, Claire, was born, it was immediately clear that Sarah, our first born, was not a fan.

She put on a good show initially – at least as a good a show as you can when you’re 2-1/2 and your world has been turned upside down. She claimed to love the baby; she would pat Claire’s head, try to feed her Cheerios and read her board books in a high-pitched, sing-songy voice.

Soon these charitable acts were interspersed with minor acts of terrorism. Pinching. Yelling. Failed attempts to tip over Claire in her baby bouncer.

I couldn’t leave the two of them alone in a room. All of my pleas to Sarah to love her sister fell on deaf ears. I envisioned a future where my home looked more like a war zone filled with mean kids than the peaceful, compassionate haven of my dreams.

The low moment came one day when Claire was napping.

Sarah was keeping me company in the kitchen while I cleaned up from lunch. As I wiped down the highchair tray, Sarah wrinkled her nose and suggested that the baby was way too messy. In the broken English employed by three-year-olds, she confided in me that the solution was to take that baby, dump her in the garbage and watch her “head crack open like an egg.”

This was the solution my three-year-old offered me to put an end to messy highchair trays, forever!

I don’t think I can fully capture the horror of the moment.

How could my sweet little angel say such a thing?

How could she be – I could barely summon the word – so MEAN?

The Words that Make Us Recoil in Horror